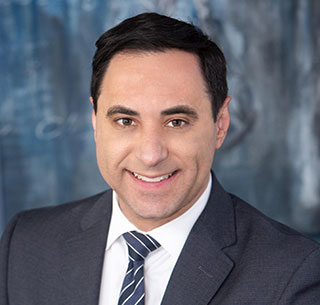 Back to All Attorneys

Jeffrey A. Rudman has been practicing personal injury law in Los Angeles and its surrounding areas since 1998. Jeff is proud to have received Martindale Hubbell's "AV Preeminent" Rating, the highest rating possible, for his legal capabilities and ethical standards based on peer review by members of the bar and the judiciary. He has been named in Super Lawyers Magazine since 2007. Jeff has successfully handled over 1000 personal injury and wrongful death cases in the practice areas of vehicle accidents, premises liability, product liability, and dangerous conditions of public property, and has obtained multi-millions of dollars in compensation for his clients through settlements and trial verdicts.

In 2014, Jeff was elected by the Board of Governors of the Consumer Attorneys Association of Los Angeles (CAALA), the largest local trial lawyers' association in the country, to serve on its Executive Committee. As such, Jeff will serve as CAALA's President in 2020. CAALA is known for the resources and education it provides to its membership of over 2500 attorneys representing injured victims, and for presenting the largest continuing legal education conference in the nation (of which Jeff served as a co-chair for numerous years). Jeff has served on CAALA's Board of Governors since 2008. He served as CAALA's Membership Vice Chair (2006-2008); CAALA's Membership Chair (2008-2011); CAALA's Las Vegas Convention Co-Chair (2011-2015); and CAALA's Education Committee Vice Chair (2014). In addition to creating, moderating and speaking at continuing legal education seminars and conferences throughout California, Jeff is credited with the creation of the CAALA Document Bank which provides thousands of sample documents for use by attorney members of the association. In 2015, Jeff also served on the Board of Governors for the Consumer Attorneys of California (CAOC).

Jeff is a 1998 graduate of Loyola Law School, where he earned a J.D. He is a 1995 graduate of the University of California at Santa Barbara, where he earned a B.S. Jeff was presented with Loyola Law School's First Honors Award in the study of Professional Malpractice in 1997. He was presented with the CAALA President's Award for Outstanding Service to the Association in 2007, 2011, and 2014.

Hear What Our Clients Have To Say

Mr. Rudman is very professional, and made a very traumatic experience a more comforting ordeal. He not only was family oriented but a person that truly believes and fights for his clients. Not afraid to stand up to the Big Corporations. He make your case feel like your the only one and is in constant communication. Never felt that I had to track him down. Very punctual and did exactly what he said he was going to do. His staff as well made it a very pleasant experience. Highly recommend this firm. His legal representation is top notch. Thank you Jeff, and Team.
Posted by: Elizabeth Morgan